Tales of the Hidden World is a short story collection, written by Simon R. Green. This anthology was published in 2014 by Open Road Media Science & Fantasy. It contains mostly standalone stories, but one story goes with the Secret Histories series. The stories fall in the genres of urban fantasy and science fiction.

Blurb for TALES OF THE HIDDEN WORLD 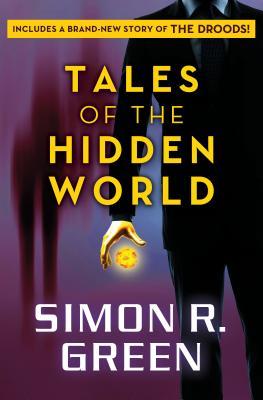 Seventeen delightfully unexpected stories from Simon R. Green including a brand-new adventure of the Droods take us deep into the Darkside, embroil us in the Secret Histories, and lead us into the shadowy places where monsters and demons roam.

Welcome to the worlds of Simon R. Green. In this wide-ranging collection, the New York Times‘ bestselling urban fantasist opens doors into hidden places: strange realms bordering our own mundane existence and prowled by creatures of fancy and nightmare.

Here are the strange, frequently deadly and sometimes even dead things that lurk in garbage-strewn city alleyways and grimy subway stations after midnight, visible only to the most perceptive human or inhuman eye.

In these tales, Green revisits the ingenious worlds within worlds that he created for his wildly popular novels. Take a stroll on the Darkside with a jaded street wizard, an underpaid government functionary responsible for keeping demons, vamps, and aliens in line.

Enter the hidden recesses of Drood Hall, where the aging family member who creates powerful weapons that protect humankind recalls his long and bloody career. Join a squad of no-longer-human soldiers dispatched to combat the all-consuming jungle on a distant planet. Visit a house at the intersection of two realities that serves as a sanctuary from the evil of “all” worlds. Confront the unstoppable zombie army of General Kurtz in a brilliant homage to”Apocalypse Now”.

And whatever you do, never forget that there “are” monsters out there. Really. Each story includes a new afterword by the author.

Jen’s Review of TALES OF THE HIDDEN WORLD

I read Tales of the Hidden World because I received a free copy from Netgalley for review consideration. My opinions are my own.

This review is a repost from our old blog Books That Hook.

Tales of the Hidden World is a collection of short stories written by Simon R. Green.
I expected urban fantasy, since that’s what I know him for, but this collection takes the reader in many different, unexpected directions. I believe there’s a little something for most everyone who likes anything weird, unique, or scary.

1) Question of Solace: This goes with the Secret Histories series he writes. In this short story, we learn more about Jack Drood, the family Armourer. He contemplates his past when he was a field agent.
2) Street Wizard: This one might also go with the Drood books; I couldn’t really tell. It’s about a wizard who has to clean up supernatural problems.
3) Death is a Lady: He describes his own Near Death Experience.
4) Dorothy’s Dream: Dorothy revisits Oz as an old woman.
5) Down and Out in Dead Town: An analogy between zombies and homeless people.
6) From Out of the Sun, Endlessly Singing: A science fiction story about people who have left Old Earth
7) It’s All About the Rendering: This one is a fantasy story about a house that provides refuge from both realms. The house is put under inspection, both structurally and magically.
8) Find Heaven and Hell in the Small Things: Another science fiction story. A soldier wears a futuristic battle suit.
9) Jesus and Satan Go Jogging: Like the title sounds, it’s about Satan meeting up with Jesus in the desert. They end up jogging together after Satan fails to tempt Jesus.
10) Food of the Gods: This story confused me. I didn’t really understand what it was about.
11) He Said, Laughing: This one was my favorite. It’s about a general in Vietnam who creates an army of zombies.
12) Soldier, Soldier: Simon R. Green’s first published story
13) Manslayer: The first story he sold for money. It’s a fantasy, sword and sorcerer story.
14) Cascade: I liked this one too. It was about a water elemental.
15) Soulhunter: I was confused by this story too. I started off thinking it was about a real hunter of Demons, Hags, and Wolves, but as the story progressed, I began to wonder what it was really about.
16) Awake Awake Ye Northern Winds: This was an enjoyable story about pirates and magic.
17) In the Labyrinth: This was another pirate story. In this one, there are demons.
Overall, I’d recommend this collection because I think a person could find at least one story in here that he or she would like.
I don’t think many people will like every story because tastes vary so much. I, for example, don’t like science fiction stories. I also have a strong dislike of present tense writing, and three of the stories were written in that tense.
Simon R. Green is one of the most imaginative writers I’ve read. Some people might not be willing to stretch their imaginations as far as he takes it. All I can say is: try it, you might like it!

See our complete review index by clicking below on the banner:

In addition to being a book blogger, I am a mother of three children, a retail backroom coordinator, and a wannabe writer (when I make time to do it).
View all posts by Jen Schaper →
Tagged  2014 release, 4 stars, anthology, collection, review, science fiction, Secret Histories, short stories, Simon R. Green, urban fantasy.
Bookmark the permalink.